Here I post my translation of a short note by Franco entitled "Altri Commenti sui Trionfi", posted on Jan. 11, 2016 (http://www.naibi.net/A/501-COMTRIO-Z.pdf).  I admit that my scan of a print-out for the table doesn't look great; but it's readable. It is a valuable lead-in to the more substantial note that chronilogically follows (of Jan. 20, 2016). This translation first appeared at http://forum.tarothistory.com/viewtopic.php?f=11&t=1074&p=16636.

Other comments about the triumphs

The idea for this brief reflection goes back to a proposal of classification suggested recently on the Tarot History Forum. Many of the discussions that have been debated in that forum resemble conversations among experts. In fact, gone are the days of our ancestors, when we would pontificate that Verba volant, scripta manent [Words fly, writing remains]. These days we have a new situation, with an intermediate stage, such that we should perhaps change the Latin adage by inserting a question mark: scripta manet? Our writings on web pages in fact appear intermediate between verba and scripta, meaning that formally they should be considered scripta, but in substance are presented rather as verba. It may be that something remains the same.

Among the many discussions on the topic, recurrent and repetitive (even for a partial interest in the subject by the professionals of fortune telling), I fixed my attention on a short message posted by Huck on the forum a month ago (1); I put forth again below the element of interest.

2
As for me, I'd rather define differently the scheme of the decks of cards in question. It is true that we have different objects of observation, or in any case of imagination, but they can be divided into two groups of different structure, cards and triumphs, adopting from the outset a subdivision which was then applied for centuries also in the production of playing cards, when, for simplicity, they are often distinguished into "short" and "long"; I indicate here cards with C and triumphs with T.

We immediately encounter a significant complication as soon as they are considered besides types of cards also as types of games in which they are used. Specifically, there must be consider in the classification also some intermediate or mixed cases, because, in addition to the type of card, the type of game is hardly negligible: it is in fact the case that games of the triumphs family can be played even with the common deck, once you establish how to choose and use the trumps. I think then that we can examine an attempt at a different classification, presented in the table below, which will in turn be easily improved later. Obviously, the new subgroup C / T is born,once we consider the use of the cards; neglecting the use, the subgroup disappears immediately.

The main problems are in the first place to better understand the difference between group C and group T, and then to reconstruct as accurately as possible when and how the transition from C to T occurs; particular attention should reasonably be paid to the link between C3B and T2 [translator's note: see table below]. There was in fact very likely, and also very quickly, at least a partial change from figure cards to superior or triumphal cards and these latter could somehow lose the connection with the suits of origin.

The first known example for the whole family of triumphs is the deck of Marziano, in which the top 16 cards added to the deck may be considered, unusually, both as four groups that continue further the cards of the four suits (case C3B T2), and as a new set of sixteen cards, countable precisely from 1 to 16, which becomes independent of the other cards, and thus turns into case T3. Obviously type T3 may in turn be subdivided into many particular cases, in

3
correspondence with the many types of tarocchi that have been used in different times and places.

A deck of the type indicated, with 16 added cards, may even belong to the type T1, if only it contained the number, high but not impossible, of 80 cards. Thinking in these terms, however, it would seem more reasonable that a triumphal series of 12 cards would be added to a standard deck of cards 4x12. Even in that case, like in the deck of Marziano, the 12 additional cards with superior trick-taking powers [poteri di presa] could, being independent of the four suits, be added in groups of three to each of them. 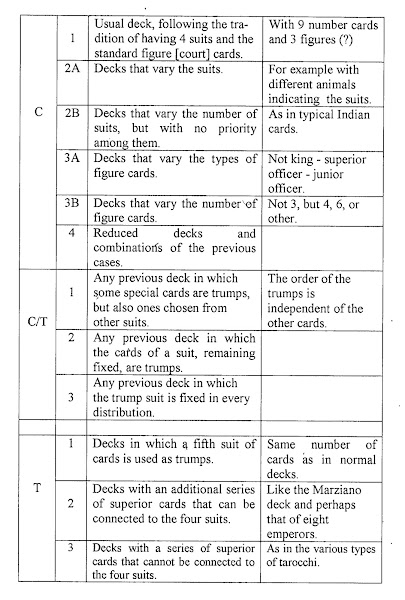 There also remains to be examined the next case, in which the ordinary deck is reduced to a deck of 32 cards, as has existed

4
variously in many times and places, and the eight cards could be added or be independent or be inserted in pairs into the four suits. The deck of "eight emperors" could be of this type.

Of course, any deck of type T1 would be compatible also with different numbers of cards added, whether even [pari] not multiples of 4, or odd, with the only condition that the number of cards of the fifth suit be equal to that of the other four. On the other hand, in any deck of type T3 there do not exist in principle limits on the length of the series of added cards, except those to be met for a satisfactory practice of the game; an example of the lower limit with the triumphal series reduced to a single card seems to be that of the deck described by Ross Caldwell with a single Emperor.

Any card game of the triumphs family requires the definition of some ranking of the cards so that no discussions arise on the winner of the tricks. Something similar occurs in various trick-taking games, as in those of the family of tressette, or when playing bridge no-trump. Pertaining to the triumphs [trionfi], however, we need a little more, represented by the trumps [le briscole].

In the history of card games the issue of determining the trumps and their order is resolved in the most different ways, whether by assigning the function of trump [briscola] to certain cards in the deck, or to an entire suit, or - and this is the case of the most interest connected with all the tarocchi - adding special cards with precisely the purpose of trumps. The main problem of the added trump suit is that only in a few cases do the related cards show their order number displayed on the card itself. Often the order is only suggested by the figure on the card. The main criterion used seems to have been exactly that of the triumphs: in this context, the triumphs are to be understood just as those of Petrarch, that is, a triumph engaged in triumphing over the preceding and then in turn being outdone by the next triumph.

The triumphal series used in the cards of the game is more or less long depending on the time and place in which it was adopted, but is however still significantly longer than that of the Petrarchan "original", which has created not a few problems for card players of different regions, so as not to put in question the order in tricks, when the relevant numbers of the order were not printed directly on those cards

A classification of the cards of the triumphs almost inevitably involves not only the type of cards but also their use. In particular, a significant complication arises from the rules of the game, because games of the triumph type could be made – one could say by definition - not only with any deck of cards equipped with superior cards functioning as trumps, but also with any ordinary deck, once the system to determine the trumps and their order has been agreed upon.
Posted by Michael S Howard at 6:13 PM